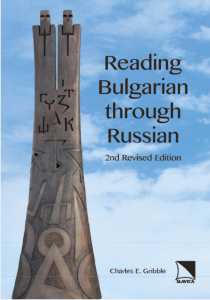 The second revised edition of this innovative book teaches the user to read Bulgarian by taking advantage of the similarities between Bulgarian and Russian. Fifty-one sections explaining the structure of the Bulgarian language are reinforced by thirty-six reading selections, fourteen of them new. The book can be used with a teacher or for self instruction. Persons without a knowledge of Russian will need to look up more words in a Bulgarian-English dictionary. Starting with the first reading selection broad use is made of proverbs, which provide content intended for native speakers and interesting for the message conveyed, but with limited vocabulary and only those grammatical structures which have been explained to date. New reading material includes, among other things, uncut short stories by Elin Pelin and Yordan Yovkov, the first thirty-six articles of the new Bulgarian Constitution, a short epic song starring Krali Marko and Sharko the Wonder Horse, a selection of Gabrovo jokes, encyclopedia articles (on Cyril and Methodius, the Bulgarian language, three leading scholars, St. John’s Day), poetry by Hristo Botev, and more. Charles Gribble taught Slavic languages and linguistics for forty-nine years at three universities: Ohio State, Indiana, and Brandeis. In 2006 the Bulgarian Academy of Sciences honored him with the Marin Drinov Award for his scholarly contributions in the field of Slavistics and Bulgarian studies and for his development of scholarly collaboration between the USA and the Republic of Bulgaria. In addition to his other achievements, Charles Gribble was co-founder of Slavica Publishers and served as its president from 1966–97.