Polish Syllables The Role of Prosody in Phonology and Morphology 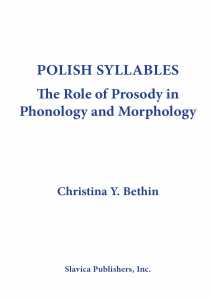 Polish Syllables is the first comprehensive study of the role that syllable structure plays in the phonology and morphology of a Slavic language. This autosegmental generative analysis offers completely new solutions to several fundamental problems of Polish phonology and makes the theoretical claim that there are two stages of syllabification which are phonologically significant. Chapter One proposes a set of syllable-building rules. Chapters Two through Six provide evidence for the syllabification rules proposed and for the syllable as a meaningful unit and/or domain of linguistic processes. Chapter Two is an analysis of nasal vowels in Polish. Chapter Three examines gliding and related phenomena such as iotation and palatalization. In Chapter Four vowel-zero alternations are interpreted as syllable-conditioned processes. Chapter Five takes voicing to be a privative feature in Polish and treats voicing assimilation as syllable-dependent. In Chapter Six data from comparative and imperative formation, and from language change, demonstrate that syllable structure governs certain morphological processes as well. It is of considerable theoretical interest that syllable structure is so central in the phonology of a language which tolerates extraordinarily complex consonant clusters, and it suggests that a hierarchical analysis of syllable structure is to be preferred over a linear one.

"...the high overall quality of the work ... application of linguistic theory to the Polish material in such a way as to make the theory accessible to Slavists and the data accessible to general linguists." (from the award letter)

"...breadth of vision is shown ... it is a fascinating and clearly argued study..." (SEER)

"...essential reading for those working on Polish and other Slavic languages ... the first chapter in particular is of interest to more general readers. ...should serve as a resource for many years to come." (Phonology)

"...well researched and presented with great care and conscientiousness." (CSP)