Indiana Slavic Studies Volume 12: Of All the Slavs My Favorites: In Honor of Howard I. Aronson on the Occasion of His 66th Birthday 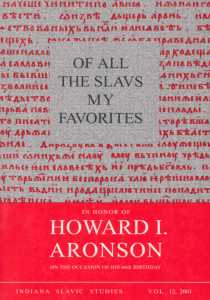 Professor Emeritus Howard I. Aronson of the University of Chicago has been celebrated for his linguistic scholarship on Balkan and South Slavic linguistics, as well as his groundbreaking work on Georgian grammar and language instruction (including his two textbooks with Slavica). This Festschrift honors his Balkan and South Slavic persona with a collection featuring a virtual Who's Who of North American scholars in this area. Contents Victor A. Friedman: Preface     1 Donald L. Dyer: Foreword     5 The Publications of Howard I. Aronson     7 Ronelle Alexander

Bridging the Descriptive Chasm: The Bulgarian "Generalized Past"     13

Distributive Verbs in Serbian and Croatian     103

The Nation-State and Minority Languages: Turkish in Bulgaria     155

Questioning the Dominant Paradigm: An Alternative View of the Grammaticalization of the Bulgarian Evidential     171

Hunting the Elusive Evidential: The Third-Person Auxiliary as a Boojum in Bulgarian     203

Attitudes to Macedonian Conditional Formation: The Use of dokolku and bi     231