The New York Missal: A Paleographic and Phonetic Analysis 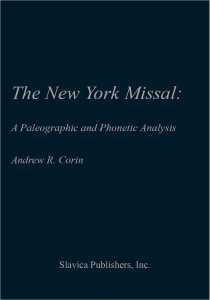 Along with an analysis of the New York Missal itself (a Croatian Glagolitic manuscript of the second quarter of the 15th century), this volume represents a statement of the phonetic, orthographic, and graphic characteristics of Croatian Church Slavonic during the 14th and 15th centuries. In it the author attempts to define criteria for linguistic and paleographic dating and localizing of Croatian Church Slavonic manuscripts. These criteria are then applied to the New York Missal in an attempt to determine as closely as possible the time and place of its origin. This is the first monograph to focus on the language and script of a Croatian Glagolitic liturgical codex. It should be of interest to those who study any of the national redactions of Church Slavonic. On the one hand, it can serve as an introduction to the graphic, orthographic, and phonological norms of Croatian Church Slavonic. On the other hand, the methodological innovations introduced in this volume should be of interest to all who are engaged in philological and paleographic research. First, conclusions concerning the New York Missal are based upon a preliminary comparative study of a corpus of text from the remaining Croatian Church Slavonic missals. Second, wherever possible, Corin has applied quantitative methods to the study of certain traditional issues of Slavic historical linguistics and philology (vocalization of jer, use of the symbols for jer, reflexes of jat', use of the letter "jat'," reflexes of the front nasal). While this study significantly advances the prospects for linguistic and paleographic dating of Church Slavonic manuscripts, it illustrates at the same time the dangers inherent in such procedures. One of the most important characteristics of the New York Missal is the fact that it was copied by probably eleven scribes (the book is illustrated with reproductions of samples of each of the hands). It turns out that the scribes demonstrate a strikingly broad range of variation with respect to various linguistic and paleographic features. If any one of them had copied the manuscript in its entirety, it is possible that we would reach significantly different conclusions concerning the age and provenance of the manuscript.

"Indeed, anyone concerned with problems of paleography may read this study with pleasure and profit. ... Corin's exposition is scrupulously lucid..." (MLR)