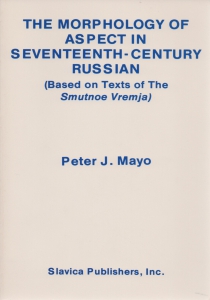 Since the seventeenth century was a critical period for the development of modern Russian, this study focusses on a relatively unified group of texts from one period and subjects them to a detailed and careful analysis. Constant comparisons to the situation in modern Russian are made. The six chapters are: Introduction; Non-prefixal pairs; Prefixal pairs; Parallel prefixation; Prefixal-suffixal pairs, and Biaspectual verbs. A thorough index of each verb form cited makes it easier to use this book as a source of information in future work. "This is a useful book which, with its comprehensive index of verb-forms, will have to be taken into account in all the work which remains to be done in the area in the future." (ISS) "Dr. Mayo's book forms a welcome addition to the literature on the development of Russian aspect. It is an equally valuable contribution to the study of the Russian literary language of the early seventeenth century." (SEER) "...edin cenen spravochnik za izsledovatelite na glagolnata morfologiia v istoriiata na ruskiia ezik." (SE)