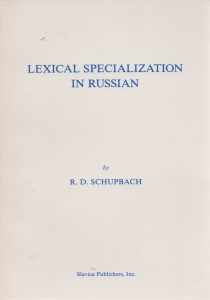 Chapter I examines the neuter, which is the rarest of the three Russian genders, paradigmatically and syntagmatically. Moreover, its rate of decline is accelerating. The neuter's productive base is shown to be very narrow and highly syncretic. Historically it has followed a "bust-boom-bust" cycle which appears to be crucial to its predominant function as a stylistically and semantically specialized category. In Chapter II the third-declension feminines are shown to be similar to the neuters in all of the above regards except one: they have completed just two-thirds of the cycle; only the precursors of a final "bust" are detectable. In Chapter III the role of the two noun classes in the lexicon is analysed in terms of markedness theory. It is shown that both groups are ineluctably associated with abstract meaning, the obsolescence of which in the modern Russian lexicon is causing the decline of the neuter and the precursors thereof among the third-declension feminines. "The book is attractive and informative on a level that should appeal to both specialists and students..." (SEEJ) "...clearly written and generally accessible work... Overall, this is a valuable study." (SEER)