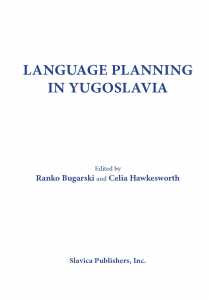 Notes on the Contributors     5

Languages of National Minorities and Ethnic Groups in Yugoslavia     43

Languages of National Minorities in Vojvodina     59

The Yugoslav Model of Language Planning: A Confrontation with Other Multilingual Models     72

The Sociolinguistic Situation in Yugoslavia, with Special Emphasis on Serbo-Croatian     80

Standard Serbo-Croatian and the Theory of Language Planning     93

Standard, Dialect, and Register in Macedonian     117

The Planning of Turkish as a Minority Language in Yugoslavia     140

III Aspects of Change and Variation

Lexical Purism as an Aspect of Language Cultivation in Yugoslavia     176

Urban Vernaculars and the Standard Language in Yugoslavia189

Attitudes to Dialects in Language Planning     212

"A well-rounded picture of the language situation in former Yugoslavia, based on first-hand accounts from various viewpoints, emerges.

“...LPY will remain an important source for those who wish to understand fully the causes of the dissolution of Yugoslavia as well as for sociolinguists concerned more broadly with the complex and often insuperable problems of multilingual states." (SEEJ)

"...will remain an important linguistic as well as historical document. ...a valuable reference... (CSP)