A Handbook of Vlax Romani 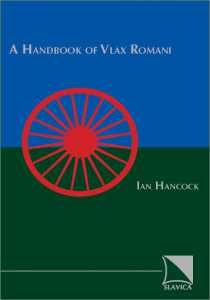 Although there are over nine million Roma (plural of Rom, the correct name for those people who have been more often referred to as "Gypsies" in English) in Europe and North America (plus many more all over the world), no usable modern grammar of their language, Romani, exists in English. Of all the different kinds of Romani, the Vlax dialects have the most speakers and are spoken in the greatest number of countries around the world. It is an appropriate choice, therefore, as the type of Romani which will be most widely useful to the learner. It is also the variety for which most dictionaries, grammars (in languages other than English), and non-linguistic texts have been published. The Vlax dialects are very similar to each other, and having learned one, learning any of the others may be accomplished with little adjustment. As Victor Friedman points out in the preface: "This book is intended as a teaching grammar for students who are studying Romani in order to learn something about it, and/or to be able to use the language for academic and other pursuits. At the same time, the author is aware of the fact that this grammar can be used by Romani speakers seeking to learn about their native language as the object of study and standardization. It is thus also a contribution to the creation of an international Romani standard for use by speakers of the language themselves. This work is of the same use to general linguists and students of Romani dialectology as it is to student of other disciplines: it can prepare them to go out and do fieldwork in the investigation of those questions that interest them. By describing a supradialectal variety rather than a specific dialect, Hancock not only maximizes the potential practical applicability of his material, but serves a variety of academic and non-academic interests for both speakers of Romani and those who wish to learn it. Above all, this work is an introduction to the language of a unique and remarkable group that has survived centuries of persecution with its language and identity intact. The language and its speakers are well worthy of more positive attention than they have so far received from the world at large." Professor Hancock's book starts with a summary of current knowledge of the Indian origins and westward migration of the Roma, then proceeds to an illustrated summary of the dialects of Romani. A survey of the language itself, in the context of its socio-linguistic setting and current efforts to create a supradialectal standard for all Roma, follows. It contains material on spelling, the sound system, pronunciation, word formation and derivation, morphology (nouns, the article, pronouns, post- and prepositions, adjectives, verbs, adverbs, conjunctions, numerals) and much more. The book concludes with a bibliography and index. "...extremely interesting and useful work." (Diachronica) "This is a very informally written yet massively informative little volume..." (SEER) "...a sterling contribution..." (Language)