A Glossary of Greek Romany As Spoken in Agia Varvara (Athens)

Gordon M. Messing
OUT OF PRINT 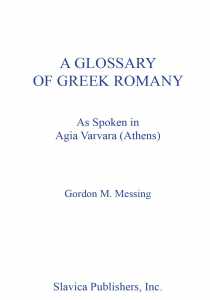 For at least a hundred and fifty years the Gypsies and their language have attracted much scholarly attention. Curiously enough, although the presence of Gypsies in Greece has been attested since the 14th century, the Greek Gypsies have been much less studied than many other Gypsy populations and their form of Romany has been largely unexplored. Since the sedentary Gypsy community in the Athens suburb of Agia Varvara is both large and fairly uniform, this seemed a particularly promising site to carry out the linguistic research on which this glossary of Greek Romany is based. There is good reason to believe that this Gypsy group originally came to Greece from Turkey. Though only older persons speak Turkish, a notable feature of the dialect is its incorporation of some Turkish verbal conjugation. Adult speakers are bilingual in Greek and Romany and their vocabulary has drawn extensively upon both Greek and Turkish. In grammatical structure the dialect shows clear affinities with the Turkish Romany speech ably described by A. Paspati over a century ago. The present work aims at an overall picture of the dialect though in small compass. A brief grammatical sketch precedes the glossary, together with a few specimen texts. The Romany-English glossary occupies the main part of the work, which is rounded off by a skeleton English-Romany glossary. "The result is a valuable contribution to the study of Gypsies and their language." (Newsletter of the Gypsy Lore Society) A Glossary of Greek Romany As Spoken in Agi