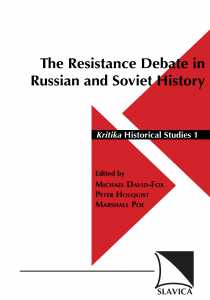 Articles originally published in the journal Kritika: Explorations in Russian and Eurasian History. A portion of the editors' introduction states:

"Just as resistance as a historical phenomenon can appear in a wide variety of historical circumstances, resistance as a methodological tool can appear in very different kinds of historiographical approaches. The essays in this volume provide ample illustration of these assertions. At the same time, it can also be said that resistance is a concept that assumes special importance, and is accompanied by special controversy, in conditions of oppression and dictatorship. This is true not only because people resist especially when they are oppressed, or even because dictatorial states, especially modern ones, are particularly concerned with registering and stamping out resistance as well as other forms of real and imagined dissent. It is also because historians tend to become more fascinated by resistance-or, to put it another way, the political stakes in studying resistance are raised- particularly when the concept serves, implicitly or explicitly, to separate or distance groups or people from a regime or system. It is thus not surprising that resistance-centered scholarship has been prominent in subaltern studies, histories of colonialism, the history of Nazi German, and more recently, in Soviet history and the history of Stalinism. In this volume, historians in the Russian and Soviet fields put resistance as both a phenomenon and a concept under the microscope, and they stake out a number of quite different positions."

CONTENTS From the Editors: Resistance Pro and Contra The Resistance Debate 1. The Thoughts on the Absence of Elite Resistance in Muscovy RICHARD HELLIE 2. From Resistance to Subversion Imperial Power, Indigenous Opposition, and Their Entanglement PAUL W. WERTH 3. Popular Resistance in the 1930s Soliloquy of a Devil's Advocate LYNNE VIOLA 4.Speaking Out Languages of Affirmation and Dissent JOCHEN HELLBECK 5. "God Is Now on Our Side" The Religious Revival on Unoccupied Soviet Territory during World War II DANIEL PERIS 6. The Tenacious Liberal Subject in Soviet Studies ANNA KRYLOVA Reactions 7. On the Subjects of Resistance PETER FRITZSCHE 8. Revolution and Authenticity Reflections from France on the Russian and Soviet Experience DONALD M. G. SUTHERLAND 9. Whither Resistance? MICHAEL DAVID-FOX