The Great Turkes Defiance: On the History of the Apocryphal Correspondence of the Ottoman Sultan in its Muscovite and Russian Variants

Daniel C. Waugh
OUT OF PRINT 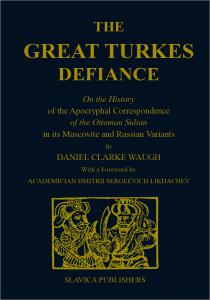 With a foreword by Academician Dmitrii Sergeevich Likhachev. The cycle of apocryphal correspondence between various rulers and the Ottoman sultan, which was popular in seventeenth-century Muscovy and subsequently in the Russian Empire, provides valuable data concerning Muscovite contacts with the rest of Europe and the interaction between translated and original Muscovite literature. This book establishes for the first time the European context in which these letters should be studied and provides a fresh and comprehensive treatment of their literary and manuscript history. The close textual analysis presented in the book is based upon extensive work in Soviet manuscript repositories and collections of European pamphlet turcica. "Daniel Clarke Waugh has given us a fine piece of scholarship: The Great Turkes Defiance is exemplary in its mastery of textual detail, original in its conclusions, and even rather exciting in the breadth of its cultural-historical scope." (RR) "Technically and methodologically this monograph is simply a tour de force... The impartial reader will find it difficult not to be overwhelmed by Waugh's evidence and thoroughly convinced by his arguments. This is a valuable contribution to our knowledge of seventeenth-century Muscovite culture." (The American Historical Review)