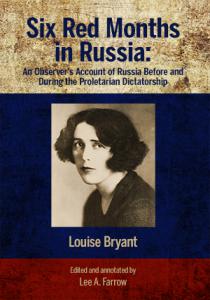 Louise Bryant and her husband John Reed were among a relatively small group of Americans who participated in one of the most important events of the twentieth century, the Russian Revolution of 1917. As first-hand observers, they attended meetings of the revolutionaries, were present at the Winter Palace as it was under attack, and witnessed the surrender of the palace guards. Over the next weeks, they saw a new regime emerge and met many of its most important figures, including Lenin, Trotsky, Kamenev, and Kollontai. Bryant returned home in 1918 and immediately began working on the book that would become Six Red Months in Russia. Unfortunately for Bryant, her sex and her relationship with Reed overshadowed her talent as a writer and the depth of her observations of this historic event. But Bryant deserves better; she had her own voice and was a skilled observer and journalist in her own right. While Reed’s book is certainly a significant work, it contains little personal commentary. Bryant’s account, by comparison, is also a documentation of the revolution, but it goes farther than Reed’s in many ways, adding interpretation to observation. Bryant communicates what life was like during the days of the revolution—the people, the food, the excitement, the fear. She is also keenly aware of her American audience and speaks directly to them, urging them to pay attention to this world-changing moment in history and not to be fooled by the misinformation about Bolshevism and the new regime. Six Red Months in Russia conveys Bryant’s understanding of the revolution, and reminds us of the utter enthusiasm that many Russians, and Americans, felt for socialism and its yet-untainted, utopian ideals. This new edition of Bryant’s book is annotated and set in its appropriate historical context to create a more accessible text for modern readers on the anniversary of this truly world-changing event.