Theofanis G. Stavrou and Peter R. Weisensel
OUT OF PRINT 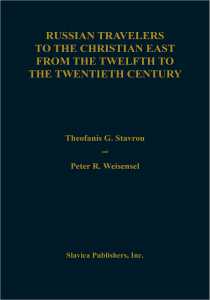 This bibliography is intended for a broad audience in the humanities and social sciences. Included here are books and articles which in some way can be called travelers' accounts. Generally speaking, "traveler's accounts" are works written by eyewitnesses about their experiences or impressions in the Christian East. This category includes pilgrims' accounts, officers' memoirs, ambassadors' reports, scholars' monographs, newspaper articles, and travelers' observations, all of which demonstrate the breadth of Russian interests in and concern about the Christian East. The compilers were primarily interested in human institutions; consequently, works in the natural sciences, when no information about human inhabitants or institutions was provided, were excluded from the bibliography. Works which might be called tourist guides are omitted -- that is, works which contain descriptions of what is to be seen, rather than what someone has actually seen. The expression "Christian East" refers to those areas associated in Russian thinking with the origins of Christianity, Orthodox culture, and the geographic jurisdiction of the Eastern Patriarchates of Constantinople, Alexandria, Antioch, and Jerusalem. Geographically this included Greece, Anatolia, the Fertile Crescent, Palestine, Egypt, Abyssinia, Bulgaria, Albania, Serbia, Montenegro, and Romania. The chronological confines of the bibliography extend from 1106, the date of the earliest extant Russian journey (in this case, a pilgrimage) by the abbot Daniil, to 1914, the outbreak of the First World War. The entries give the date of the journey, the author's name, the title of the account, publication data, locational codes showing where the book or article can be found, and an annotation (which is in some cases quite extensive). The book consists of six divisions: a 50-page introduction (with listings of sources and location codes); accounts from the twelfth to the eighteenth century; accounts from the eighteenth century; accounts from the nineteenth century; accounts from the twentieth century to 1914; addenda; a glossary of terms, and a 90-page index. "...this impressive book will be an essential reference guide..." (Middle East Studies Association Bulletin) "The bibliography in question will make an indispensable research tool for all people interested in the history of Russia, Eastern Europe in general and the Near East till the beginnings of the First World War. The scope of the publication is a great deal wider than its title suggests..." (Jahrbuecher fuer Geschichte Osteuropas)