Reciprocity Between the Various Tribes and Dialects of the Slavic Nation 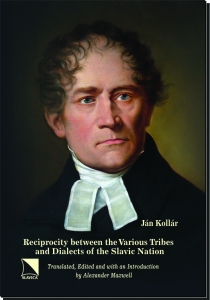 Ján Kollár, famed poet, romantic nationalist, and Lutheran pastor for the Slovak community in Budapest, took the Slavic world by storm in the early nineteenth century with his idea of Slavic Reciprocity. Kollár conceived of Russians, Poles, Czechs, and South Slavs as tribes of one great Slavic nation, destined for a glorious future if they would but unite. Kollár's ideals inspired poets, patriots, and politicians for over a century. Ironically, the (linguistic) reforms Kollár suggested for bringing about Slavic unity ultimately contributed to the fragmentation of the Slavic world. Kollár's book on Slavic Reciprocity has been published in German, Czech, Serbian, and Russian, but now appears for the first time in English, annotated, and accompanied by an introductory essay on Kollár's life, influences, and posthumous impact on the Czechoslovak and Yugoslav Republics. From the Introduction: Despite Kollár’s importance to Slavic history, his works have seldom attracted attention in the Anglophone world. The most detailed account is an analysis by Peter Black, who in 1975 briefly summarized both Kollár’s Reciprocity and Ľudovít Štúr’s Slavdom and the World of the Future in a single volume. This scholarly neglect probably derives from the national subdivisions inside Slavic studies, both historical and literary. Several Czech thinkers treat “Kollář” as a sort of honorary Czech: Tomáš G. Masaryk, the first president of Czechoslovakia, wrote that “as our first awakener, he is Czech, but he was born in Hungary.” This has affected his presentation in the Anglophone world. Kollár’s birthplace, Mošovce, lies in the center of the Slovak Republic, and Slovak scholars claim Kollár as a Slovak. Lusatian-Sorbian, Serbian, Croatian, and Slovene historians discuss Kollár’s influence on the Sorbs, Serbs, Croats, and Slovenes. None of these national approaches, however, do justice to Kollár’s life or thought: to understand Kollár’s impact on the Slavic world, we must transcend contemporary national categories. About the editor/translator: Alexander Maxwell did his master's degree in Budapest at the Central European University and his doctorate at the University of Wisconsin, Madison. He has lived and worked in Prague, Bratislava, Budapest, Bucharest, Reno, Swansea, and Erfurt. He has published several articles on Slovak history, historical sociolinguistics, and cultural history. He now teaches history at Victoria University in Wellington, New Zealand. This book is recommended for library collections at four-year colleges and research universities.