No Collusion! Catherine the Great and American Independence 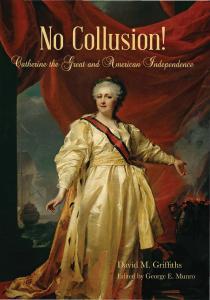 Empress Catherine II, building on the military and diplomatic successes of Emperor Peter I and Empress Elizabeth, in less than two decades of rule brought Russia to the forefront among European powers. Her creation of a League of Armed Neutrality, uniting several mercantile states of Northern Europe, was intended to guarantee the security of maritime shipping on the high seas from arrest and seizure. The fledgling thirteen United States desperately needed more than their single ally, France (from 1778), to pursue their war for independence. Unwilling to engage in traditional European diplomatic behavior, they developed a concept of “militia diplomacy,” under which merchants would be sent to foreign ports to initiate friendly trading relations. Not fully realizing Catherine’s intention to maintain absolute neutrality in order to mediate peace between Great Britain and its breakaway colonies, the Americans sent to St. Petersburg, uninvited and unannounced, a would-be ambassador. The empress refused to collude in any way.

David M. Griffiths (1938–2014) started out to study Revolutionary Era American History. But while still in graduate school he shifted focus to the Russian Empire of the same period, over his career publishing numerous articles on the Russia of Catherine the Great and translating two books from Russian to English. His articles, appearing in journals and as book chapters, have deepened our understanding of the Russian economy, politics, and society during that era, winning him an international reputation. A collection of them appeared as a single volume in Russian translation in Moscow in 2013. All the while, for some decades, he continued quietly to labor on the book that became this volume. It has been edited down from a much larger manuscript, but the argument and the language remain his own.