Humanists in a Shattered World: Croatian and Hungarian Latinity in the Sixteenth Century

Marianna D. Birnbaum
OUT OF PRINT 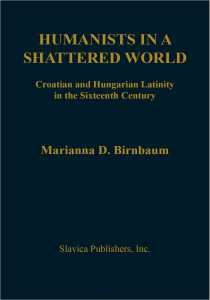 UCLA Slavic Studies, Volume 15 Ever since the first decades of the sixteenth century a Christian variant (as advocated by Erasmus and Melanchthon) gradually replaced the Greco-Roman orientation of the traditional Italian Renaissance humanism in Central Europe. This new direction took a peculiar and fascinating form in Hungary and Croatia. It developed amidst conflicts between townships and the new aristocracy, against the backdrop of a malfunctioning split kingdom, and in a region devasted by the Turkish occupiers. The country torn into three parts, the spreading of the Reformation, and the destruction of the great renaissance courts of Hungary and Croatia polarized the humanities after the Mohacs disaster (1526). The confusing political situation and permanent armed conflicts notwithstanding, there was great mobility in this area. Humanists moved to the West, in order to escape the Turks, or to the courts of the simultaneously elected, competing monarchs, Ferdinand and Zapolya, often switching their loyalties, serving first one and then the other. Many, engaged by the above rulers, or in the service of the Church, traveled as envoys to the Porte. Here the author investigates a group of sixteenth-century Hungarian and Croatian humanists, their vicissitudinous lives and remarkable contributions to every facet of European culture. "This book's objectivity, scholarship, and novelty place it above others treating the same area and period. ... The depth of her erudition is astonishing." (SR)