Everyday Life and the “Reconstruction” of Soviet Russia During and After the Great Patriotic War, 1943–1948 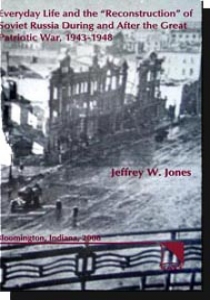 From the Series Editors

Everyday Life and the "Reconstruction" of Soviet Russia During and After the Great Patriotic War, 1943–1948 reminds us of how little we know about the end of the war and the immediate post-war era in the Soviet Union. Jones uses the case of Rostov-on-Don, totally devastated by the vast battles that raged around it, to reveal how people and party responded to the grim task that confronted them after the German forces were expelled. Society and state both strived to rebuild but comprehended the process differently. In the official "reconstruction" mythology, state and party leaders portrayed themselves as a vanguard, whereas local populations, mostly workers, saw them as a privileged elite. The chapters revolve around these conflicting interpretative ideologies, as expressed through official public sources, internal documents, police reports on the population, and interviews and memoirs. What emerges is a portrayal, compelling and persuasive, of the physical realities of rebuilding the infrastructures of modern life and the ways various elements of society perceived the process. Jones' study will help define our approaches to chronicling post-war Soviet life, the most exciting new field in Russian historiography. From the Introduction: The period officially dubbed “reconstruction” has not received due attention in the scholarly literature. The natural tendency is to look at the war years (1941–45) or concentrate on the period from the end of the war to Stalin’s death (1945–53). Yet the period of reconstruction (1943–48) is vitally important in part precisely because it bridges the war and postwar periods. The end of the war in Europe in May 1945 is, of course, highly significant […] However, the end of the war is not the natural breaking point historians often designate it as because many of the issues facing societies in the immediate postwar period were rooted in the prewar and war years. […] The regime’s heroic tale of “reconstruction” ended abruptly (and somewhat arbitrarily) in 1948 [the year of the Soviet blockade of Berlin and the US and British airlift to end it], a year which many scholars in Soviet history have noted as an important turning point [and] relations with the USSR’s wartime allies had turned cold.

This book is Volume 3 of the  Allan K. Wildman Group Historical Series