Murder Ballads and Other Legends 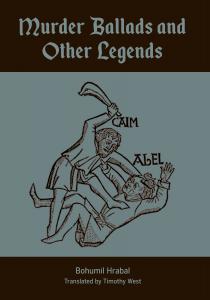 “Some texts, after I’ve written them, have woken me up in the night so that I break out in a sweat and jump out of bed.” With this confession Bohumil Hrabal concludes Murder Ballads and Other Legends, a genre-bending collection of stories published at the height of the legendary author’s fame in the 1960s. Decades after escaping the Nazis as a child, a woman returns to Bohemia behind the wheel of a Ford Galaxie to retrieve her estate. A Prague tailor’s assistant sent halfway around the world delivers an extravagant report on the shops of New York. A village beauty rejects one suitor after another before meeting an unlucky end. Hrabal mines urban folk tales to deliver an array of blackly comical first-person yarns, airing comments from reader letters and wrestling with his newfound notoriety along the way. At the book’s heart is “The Legend of Cain,” an early version of the novella (and Oscar-winning film) Closely Watched Trains. Beautifully illustrated with woodcuts from early modern broadside ballads, Murder Ballads and Other Legends appears here in English for the first time, fifty years after it first appeared in Czech.

Bohumil Hrabal (1914-97) is regarded as one of the leading Czech prose stylists of the twentieth century. The son of a brewery’s bookkeeper, he earned a law degree before working as a train dispatcher, insurance agent, traveling salesman, steelworker, and theater stagehand. In the 1940s he joined the group Skupina 42 and began writing Surrealist poetry and short fiction. He achieved national success in 1963 with the short story collection Pearls of the Deep. Banned from official publishing in 1970, Hrabal gained an underground following in the 1970s and 1980s through samizdat and exile presses. His work has been translated into more than two dozen languages, and in 1995 Publisher’s Weekly named him “the most revered living Czech writer.” He died in February 1997 after falling from his hospital window while feeding the pigeons.

Timothy West received his Ph.D. in Slavic Languages and Literatures from Princeton University.