Long Conversations in Anticipation of a Joyous Death 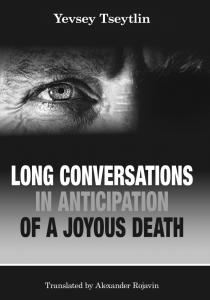 Yevsey Tseytlin’s Long Conversations in Anticipation of a Joyous Death  came about as the result of an unusual experiment. The subject of this book is unusual and deceptively simple: two authors, one young, one old and ailing, maintain a conversation over a period of five years. The setting is the city Vilnius—known before World War II as the “Jerusalem of Lithuania.” As the meetings take place, the young author records on cassette the confessions of a man preparing to die. The dying man is the Jewish-Lithuanian intellectual Jokūbas Josadė , and his revelations are often distressing, for his life consists of a series of betrayals (including that of self and of his talent) and of limitless fear and apprehension.

“A tragic account, taken from the lips of a man who awaits death as a redemption from the torment of his conscience. The philosophical aspect of narrating one’s own death is worthy of its own discussion, which should include Tolstoy’s Ivan Ilyich, as well as the academic Pavlov, Nikolai Ostrovsky, and perhaps, that American intellectual who invited all who wished to observe his throes of agony via the Internet.”
—Russian critic Lev Anninsky

“…By means of dialogue, reflections, and a collection of chance remarks is constructed so genuine a whole, illuminated by so tragic a light, that this book could be termed a novel, and not just any novel, but an exceptional one.”
—Professor Anatoly Liberman