Into the Spotlight: New Writing from Slovakia 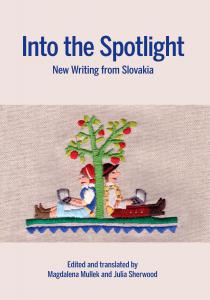 "There are stories that could have taken place anywhere - of love and hate, beauty and ugliness, illness and music - stories distinctly and intriguingly Slovak..."

Into the Spotlight features the best of what Slovak literature has to offer today. The sixteen authors presented here have all been shortlisted for, and many have won, some of the most prestigious Slovak and European literary awards. They represent the Slovak literary scene across the lines of gender, age, style and subject matter. Most importantly, all of them are living authors, engaging with today’s world and carrying on conversations with other contemporary writers and readers. Printed with financial support from the Centre for Information on Literature/SLOLIA (Slovak Literature Abroad).

More about this title in the press

Notable mention in Publishing Perspectives, May 24, 2017

Notable mention in The Slovak Spectator

Interview in Words Without Borders, September 23, 2017

Nominated for Best of the Net Anthology 2017 in B O D Y, International Online Literary Journal (the translation of Dušan Mitana's "On a Tram"), October 10, 2017