Conformity's Children: An Approach to the Superflous Man in Russian Literature 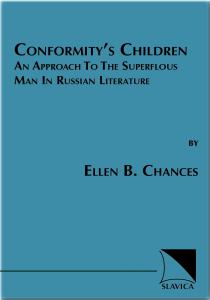 The so-called "superflous man" plays an important role in many major works of Russian literature, including those of Pushkin, Lermontov, Tolstoy, Doestoevsky, Chekhov, and Pasternak. Chances analyzes the broad cultural and literary implications of the term, shedding new light on our understanding of nineteenth- and twentieth- century Russian literature in terms of conformity and non-conformity. She places the superflous man within its Russian Historical and cultural context and with a cross-cultural framework (including American and Western European).

Chances argues that even in the writings of those authors who are considered pro-individualist, there are examples of superflous men who are killed off, literally or figuratively, and of conformists who are placed on a pedestal precisley because they conform to a societal or metaphysical order. She also discusses works in which superflous men are praised precisely because they do not conform. She demonstrates that from the beginning of the tradition, there were two types of superflous men, a societal misfit and a methaphysical one. Chances also argues for extending the definition of the superflous man to include characters that are not usually considered part of the tradition. Thus, Socialest Realism, in certain ways, can be seen as a continuation of the mainstream tradition of Russian literature.