Against the Devil in History: Poems, Short Stories, Essays, Fragments

By Aleksander Wat, Translated by Frank L. Vigoda, Edited and with and Introduction by Gwido Zlatkes 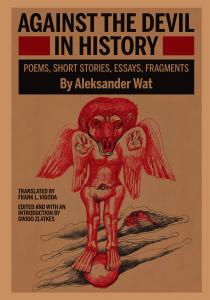 Aleksander Wat. This extraordinary poet can be seen against the background of three periods of the 20th century. Born in 1900 to a Jewish merchant family in Warsaw, he became an anarchist and futurist, edited a communist journal, and was imprisoned by the Polish police. At the beginning of WWII he was arrested by the Soviets and spent several years in Soviet prisons. He returned to Poland an anticommunist in 1946, established an important publishing house (PIW), in the 1950s suffered a stroke that resulted in severe recurring pain, and started to write poetry again. He emigrated to Italy and France, and in 1967, after years of struggling with pain, he committed suicide. The third part of the century saw the efforts of his widow Ola Wat (herself an interesting writer) and a group of admirers to publish and promote his works, of which a large part remained unfinished: My Century (conversations with Czesław Miłosz), collected poems, letters, miscellaneous papers, and notebooks.

The uniqueness of Wat's oeuvre lies in the seamless blending of several seemingly heterogeneous components. He draws from numerous sources, including the Old and New Testaments, mythology, Oriental traditions, history, sociology, politics, biology, and mineralogy, to name only a few. Yet at the same time his poems are extremely sensual and somatic. Ideas, images, and dreams meld with important existential and theological questions, oscillating between hilarious affirmation and complete skepticism and negation, and undermined by suffering and pain.

Against the Devil in History is a representative selection of Wat's writings.
Jan Zieliński