A Syntax of Serbian: Clausal Architecture 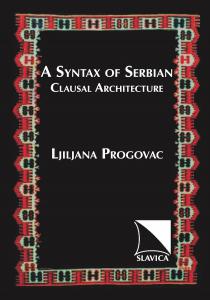 Couched in the recent Minimalist theory of syntax, A Syntax of Serbian: Clausal Architecture builds a skeleton of functional projections for Serbian, arguing that their inventory is limited to morphologically manifested categories in Serbian—Polarity, Aspect, Agreement, and Tense—each of which can project two layers: a subject layer and an object layer. It is in this functional skeleton that the central syntactic phenomena of Serbian find their place and explanation. The result is an in-depth study of Serbian syntax on the cutting edge of recent theoretical developments. To take just one example, in an innovative analysis, Progovac argues for the existence of an event pronominal in Serbian, the particle to, proposing three basic functions shared by personal pronouns: deixis, anaphora, and bound variable. In its deictic use, it introduces a clause, parallel to demonstratives. In its anaphoric use, it refers to a previously mentioned event. In its bound-variable use, it is argued to be the spell-out of the bound event pronominal, which constitutes a syntactic reflex of the semantic analysis of adverbials as predicates of events. This analysis brings together abstract theory and a hitherto unanalyzed particle in Serbian, providing striking support for the theory and an explanation for the mysterious particle. This same pronominal also provides vital tests and insights into other phenomena in the syntax of Serbian, especially clitic placement, underscoring the need to analyze syntactic phenomena within the entire system of grammar, rather than in isolation. The book also offers a novel exploration of second-position clitics, building upon previously competing analyses from various frameworks in fields as disparate as phonology and syntax. Progovac identities the verb as the common factor uniting the distinct types of clitics, pronominal and auxiliary, which brings them into their fronted position. This analysis both benefits from and then sharpens the new theoretical proposals. This book is indispensable not only for specialists in Slavic languages, but also for linguists interested in cutting-edge developments in mainstream syntactic theory, as well as detailed analysis of important cross-linguistic phenomena in a language studied by all too few scholars.