Staging the Image: Dmitry Prigov as Artist and Writer 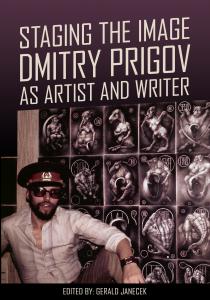 Dmitry Prigov (1940–2007), the most prominent figure in Moscow Conceptualism, is not well known in the West because of a lack of English translations of his work and scholarship in English. This collection of articles by some of the most devoted experts on his work aims to change that by providing detailed discussions in English of Prigov’s broad-based oeuvre in the visual arts, poetry, and performance. The Prague workshop in 2014 upon which this collection is based situates his work in a global comparative perspective. Prigov traveled constantly in the 1990s and 2000s, and this movement between cultures is reflected in many of his works, which stage the visual and verbal image in an international environment. Prigov understood his artistic creativity as a lifelong project which surmounts the text in the service of strategic behavior. Each dimension of his creative work is distinguished through its performative character: writing, drawing, painting, poetry readings, which conceptualize a “new anthropology.”