The Jewish Worker in Russia 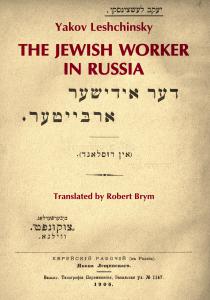 At the turn of the 20th century, the Russian Empire's 5.2 million Jews were in crisis. Having quintupled in number since 1800, they were substantially impoverished and crammed into Russia's 25 westernmost provinces. Some pinned their hopes on emigration, others on being granted permission to live in the Russian interior. Some labored with hand tools in dingy workshops, but most were forced to eke out a living as petty merchants and paupers. Hardly any were able to find work in Russia's large, mechanized factories.

In this context, the young Yakov Leshchinsky, influenced in equal measure by Marx and the Zionist thinker Ahad Ha-am, embarked on a lifelong task of analyzing the fate of the Jewish people. In The Jewish Worker in Russia (1906), a combination political pamphlet, theoretical excursus, and empirical analysis, he established a foundation for the ideology of the Zionist Socialist Workers' Party, presaged modern sociological concepts explaining the limited proletarianization and industrialization of the Jewish working class, and gave substance to the theory by analyzing a large body of unique statistical data, mainly from official sources and a quasi-census of Russian Jews funded by the Jewish Colonization Association. It was a landmark work that underscored the limitations of pure Marxism, Zionism, and liberalism; led eventually to the view that Jews would be best off seeking democracy, socialism, and personal and cultural autonomy in many geographical centers; and foretold the course of Leshchinsky's own life and career as a founding father of Jewish social science, director of YIVO's Economics and Statistics Department, and resident of Ukraine, Switzerland, Russia, Poland, Germany, and the United States who spent his last years in Israel.